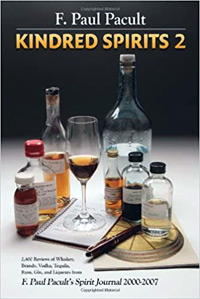 Published in 2008, Kindred Spirits 2 picked up where the initial Kindred Spirits began in 1997, with thousands of new highly detailed reviews by noted critic F. Paul Pacult.

But KS2 is more than just a mindboggling compilation of whiskey, brandy, vodka, gin, tequila and more reviews, it stands as a mirror, a reliable record of how in the period of 1998 to 2008 distilled spirits evolved as the world’s distillers responded to growing interest from consumers.

The fact that Kindred Spirits 2 has sold steadily for the last thirteen years attests to its place in the hierarchy of beverage alcohol books.