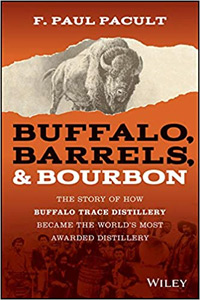 In Buffalo, Barrels, & Bourbon F. Paul Pacult tells the breathtaking saga of Buffalo Trace Distillery, the world’s most awarded whiskey distillery. Beginning at the low-lying banks of the Kentucky River that would eventually become the site of Buffalo Trace, Pacult’s new book spans centuries of colorful history, from the first explorations by Euro-Americans and the founding of the state of Kentucky to the modern era of American whiskey distilling that dawned in Kentucky in the late 1870s.

“There were no maps to guide the pioneers along those trails, but in Buffalo, Barrels, & Bourbon, Paul has provided an excellent map to the trail of one of Kentucky’s legendary distilleries,” lauded Mark Gillespie, host/producer of WhiskyCast.